We love Chincoteague Seafood Co.’s Naturally Sea-licious soups: no artificial preservatives, no artificial coloring, no MSG, and no preservatives. Gordon’s Naturally Clam and Corn Chowder from Chincoteague Seafood is no exception.  When we discovered there was a chowder that was a combination of two great chowders, clam and corn, we couldn’t resist adding it to our offerings. In addition to delicious, wholesome ingredients, Gordon’s Chesapeake Naturally contains: Heritage (the traditions of great grandfather Gordon's Baltimore restaurants continue today with the Gordon family's delectable soups, each brimming with the bounty of the Chesapeake Bay), Nature (we only use the finest ingredients, so you get only the most scrumptious soups), Commitment (we have never compromised the flavor or quality of our soups in the name of convenience or even profit), and taste (it speaks for itself).

Will you enjoy your next bowl of chowder any more now that you know what they are, and where they came from? I don’t really know, but here's some information from Chowhound: The word chowder likely comes from the French word, chaudiere, which is a special type of cauldron that was likely used to make what has evolved into what we now know of as chowder. While the exact origins of chowder are a bit unclear, the tales that suggest chowders were first made on French or English fishing boats off the coast of New England and Nova Scotia about 250 years ago seem plausible. With the arrival of French and English seafarers to parts of Canada and New England, came the arrival of their chowder. While the earliest chowders probably originated in the 1700s, the earliest American recipes have been around since the 1800s. Chowder has managed to adapt and evolve. That’s why you now have corn, pumpkin, sweet potato, chicken, and even bean chowders along with the traditional clam and seafood varieties. 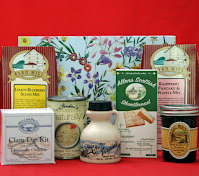 Try Gordon’sChesapeake Naturally Clam and Corn Chowder from Chincoteague Seafood Co. yourself or gift it in a seafood gift basket or gift box.
Posted by VMP at 10:44 AM No comments: