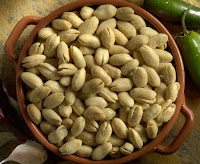 Peanut cultivation and popularity in American food culture can be attributed to Dr. George Washington Carver, nicknamed “The Father of the Peanut” for his tireless devotion to this versatile legume. In fact, in 1925, Carver published a bulletin called, “How to Grow the Peanut and 105 Ways of Preparing it for Human Consumption.”

Peanuts are actually not nuts, but legumes. Peanuts are a very valuable source of protein, niacin, folate and phytosterols, more than any nut. They also contain over 30 essential nutrients and phytonutrients. Peanuts are naturally cholesterol-free and rumor has it that there is enough mental stimulation in one peanut to give a person 30 minutes of serious thinking! Need a brain recharge, eat a peanut.