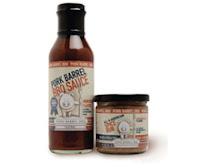 Pork Barrel BBQ is a national award winning BBQ sauce and rub company who competes on the professional barbecue circuit and has a restaurant in Alexandria, Virginia. They have won many awards. In November 2010 they received their biggest honor to date by being named one of “The 125 Best Foods for Men” and the Best BBQ Sauce in the Nation by Men’s Health magazine. They were also named one of the Best Barbecue Sauces in the Country by Country Living Magazine in July, 2011! We include Pork Barrel BBQ Sweet BBQ Sauce in many of our Virginia Gift Baskets. Enhance your meat with this delightfully, deliciously bipartisan American favorite for pork, beef, poultry and fish, our Sweet Pork Barrel BBQ Sauce is an exceptional way to give your food tasty, sweet flavor with a perfect smokin' kick! All natural ingredients and contain no preservatives or MSG.  We also offer a combo of two of their award winning sauces, the Original and the Sweet with the BBQ Spice Rub through Smithfield Marketplace.

National Barbecue Month so now's a good time to tell the story of Pork Barrel BBQ, the story of the American Dream. The journey began in early 2006 during a heated budget debate in the United States Senate. Two fatigued Senate staffers, Brett Thompson and Heath Hall were working late into the evening and discussing the late night food options on Capitol Hill. While dreaming of a tasty barbecue dinner and wishing there was a good barbecue joint in Washington, D.C., Senators were engaged in a debate over the merits of pork barrel spending. Suddenly an idea popped into their heads, an idea that is now a reality – Pork Barrel BBQ.

In June, 2008, after weeks in the test kitchen we convened the first meeting of the Pork Barrel BBQ Kitchen Cabinet and asked our Kitchen Cabinet members to rate six variations of what would become our initial product. After several hours of eating, Cabinet members narrowed down the six variations to their two favorites, liking different flavor elements from each. With the blessing of the Kitchen Cabinet, their first product – Pork Barrel BBQ’s All-American Spice Rub – was finalized and ready to take the barbecue world by storm. In December 2008, after months of working through the world of starting a small business, Pork Barrel BBQ was officially founded. It was their goal to prove that the free market was still the greatest path to success for a small business and that it was still possible to grab a piece of the“American Dream".

In July, 2009, began retail production of award winning Pork Barrel BBQ Original BBQ Sauce. In September, 2009 ABC aired their first appearance on Shark Tank which would take Pork Barrel BBQ to a whole new level moving us from a regional to national company almost overnight. On the show we were able to strike a deal with New York real estate mogul Barbara Corcoran, who became the first outside investor in Pork Barrel BBQ. We also made our first appearance on Fox & Friends, getting the chance to smoke a few hundred pounds of meat at the Fox News headquarters in New York City.

In January of 2010 they headed to San Francisco to attend our first Fancy Food Show. At the show we official launched our Pork Barrel BBQ Sweet BBQ Sauce to rave reviews. They also had the opportunity to ring the closing bell at the NASDAQ with the Shark’s from Shark Tank.

In January, 2011 they returned to the Winter Fancy Food Show in San Francisco in mid-January where we introduced our third BBQ sauce, Pork Barrel BBQ’s Mustard BBQ Sauce.

June of 2011 was a huge month for Pork Barrel BBQ – we went off the beaten path of barbeque products and introduced Que, the world’s first barbeque scented fragrance to rave reviews. Que is “An Intoxicating Bouquet Of Spices, Smoke, Meat And Sweet Summer Sweat.”

Nov. 29, 2011 Pork Barrel BBQ Restaurant opened in Alexandria, Virginia where you can try their national award winning pulled pork, ribs, brisket, chicken and exclusive Pork Barrel BBQ brisket sausage. In the future, they pledge to stay true to their mission – to unite the nation through the great tradition of BBQ, and bring bipartisan flavor to your next meal.
Posted by VMP at 8:20 PM No comments: