National Chili  Day is celebrated the fourth Thursday of February. This year it will be celebrated on Feb. 25. There's nothing better on a cold winter day.

Most historians agree that the earliest written description of chili came from J.C. Clopper, who lived near Houston. While his description never mentions the word chili this is what he wrote of his visit to San Antonio in 1828:  "When they [poor families of San Antonio] have to lay for their meat in the market, a very little is made to suffice for the family; it is generally cut into a kind of hash with nearly as many peppers as there are pieces of meat--this is all stewed together.”

In the 1880s, a market in San Antonio started setting up chili stands from which chili or bowls o'red, as it was called, were sold by women who were called "chili queens." A bowl o'red cost diners such as writer O. Henry and democratic presidential hopeful William Jennings Bryan ten cents and included bread and a glass of water. The fame of chili con carne began to spread and the dish soon became a major tourist attraction. It was featured at the World's Fair in Chicago in 1893 at the San Antonio Chili Stand.

By the 20th century chili joints had made their debut in Texas and became familiar all over the west by the roaring ‘20s. In fact, by the end of that decade, there was hardly a town that didn't have a chili parlor, which were often no more than a shed or a room with a counter and some stools. It’s been said that chili joints meant the difference between starvation and staying alive during the Great Depression since chili was cheap and crackers were free.

In 1977, chili manufacturers in the state of Texas lobbied the state legislature to have chili proclaimed the official "state food" of Texas “in recognition of the fact that the only real 'bowl of red' is that prepared by Texans.”

Here’s a recipe for a unique version of chili made with Blue Crab Bay’s Sting Ray Bloody Mary Mixer which is made with clam juice:Jim's Bloody Mary Chili 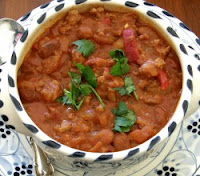 
In a medium pan, heat olive oil. Sauté onion and garlic until golden brown and remove from pan. Brown turkey in pan, season with salt and pepper if desired. Add onion and garlic back to the pan. Add all other ingredients except cilantro. Cook on low heat, stirring occasionally, for at least half an hour or until flavors develop. Prior to serving, stir in cilantro or use as a garnish. Serve with your favorite toppings, such as sour cream, grated cheese, hot peppers, etc. Serves 4 to 6.
Posted by VMP at 8:25 PM No comments: