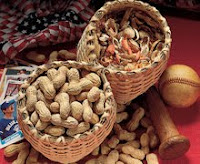 National Peanut Day is the peanuttiest of days. FYI, peanuts are not nuts. They are "legumes", like peas, beans, and lentils.

Peanuts are one of America's favorite snack foods. Americans consume more than 6 pounds of peanuts and peanut products each year," according to the American Peanut Council Peanuts are more than just a snack food. Peanuts are the main ingredient in peanut butter. Peanuts star in a variety of recipes, and is a topping for countless foods and desserts. Many Chinese recipes use peanuts in main menu items. Peanuts once took the rap as a not so healthy food. More recent research suggests that peanuts can reduce cardiovascular disease and lower triglycerides in the body. Peanuts are high in protein and fiber and are now believed to help curb hunger, and therefore help in diet control. 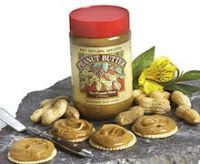 Celebrate National Peanut Day by eating peanuts wherever and whenever you can during that day. Eating peanut butter counts, too.

Check out our vast selection of Virginia Peanuts and Peanut Gifts or The Peanut Shop of Williamsburgs all Natural Peanut Butter made with Virginia Peanuts.
Posted by VMP at 7:51 AM No comments:

Why Do We Have Labor Day?

Hope you' all had a great Labor Day! FYI: The first big Labor Day in the United States was observed on September 5, 1882, by the Central Labor Union of New York. It was first proposed by Peter J. McGuire of the American Federation of Labor in May 1882.
Oregon was the first state to make it a holiday in 1887. By the time it became a federal holiday in 1894, thirty states officially celebrated Labor day. Following the deaths of a number of workers at the hands of the U.S. Military and U.S. Marshals during the Pullman Strike, President Grover Cleveland reconciled with the labor movement. Fearing further conflict, legislation making Labor Day a national holiday was rushed through congress unanimously and signed into law a mere six days after the end of the strike. The September date is observed by all U.S. States, the District of Columbia, and the territories which have made it a statutory holiday, the first Monday in September.
The holiday is regarded as a day of rest and socials. Traditionally, Labor day is celebrated by most Americans as the symbolic end of the summer. In high society, Labor Day is (or was) considered the last day of the year when it is fashionable for women to wear white.
In U.S. sports, Labor Day marks the beginning of the NFL and college football seasons.
And one of the last, but not least, in the U.S. most school districts that started summer vacation in early to mid-June will resume school near this day.
Posted by VMP at 5:26 PM No comments: