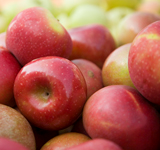 Skyland! A snitter's paradise! On Saturday, September 21, there will be held the 14th Annual Apple Butter Celebration at Skyland Resort from 11:00 AM - 5:00 PM. The Apple Butter Celebration is a one-day festival at Shenandoah National Park and it is one of the biggest ones held at the park's Skyland Resort. Freshly made apple butter, apple crafts, apple food …. apples are just everywhere! Celebrate the apple harvest as the staff sets up the copper kettles and stokes up the fire for a day of apple boiling. Apple varietals such as Jonagold, Red Delicious, and Rambo are boiled in kettles to make the festival's apple butter.

By now you’re wondering what it means to "snit". Snitting a peeled apple consists of quartering it, scooping out the core and seeds, then halving the quarters and putting them into a bucket. It takes nine bushels of apples to yield 32 gallons of apple butter from just one kettle. Event organizers plan to make six kettles of apple butter in all. Experts say no two kettles taste the same, as the mix of apples and spices is a little different in each one.

Watch the process, give the kettle a stir and try a delicious sample. Then take home some fresh-from-the-kettle jars of apple butter. There will also be live entertainment featuring the Hi-Horse Cloggers and Narrow Path Blue Grass Band, face painting, pony rides and crafts for the kids and wine tasting for the adults. Local crafters will be on site with their handmade items. Delicious foods featured are Apple Smoked BBQ, Grilled Chicken with an Apple Salsa, Granny Apple Cole Slaw, Apple Cobbler plus hot and cold Apple Cider.

If you can’t make it to one of these great festivals, you can still get some perfectly spiced and incredibly smooth Graves Mountain Apple Butter from us!
Posted by VMP at 6:58 PM No comments:

The History of Cake

In honor of Rowena Fullinwider, known as Norfolk's "Cake Lady" long before she decided to go into business, let's talk about the history of cake.

The history of cake dates back to ancient times. The first cakes were very different from what we eat today. They were more bread-like and sweetened with honey. Nuts and dried fruits were often added. According to the food historians, the precursors of modern cakes (round ones with icing) were first baked in Europe sometime in the mid-17th century. This is due primarily to advances in technology (more reliable ovens, manufacture/availability of food molds) and ingredient availability (refined sugar). At that time cake hoops--round molds for shaping cakes that were placed on flat baking trays--were popular. They could be made of metal, wood or paper. Some were adjustable. Cake pans were sometimes used. The first icings were usually a boiled composition of the finest available sugar, egg whites and sometimes flavorings. This icing was poured on the cake. The cake was then returned to the oven for a while. When removed the icing cooled quickly to form a hard, glossy [ice-like] covering. Many cakes made at this time still contained dried fruits (raisins, currants, citrons). It was not until the middle of the 19th century that cake as we know it today (made with extra refined white flour and baking powder instead of yeast) arrived on the scene. Butter-cream frostings (using butter, cream, powdered sugar and flavorings) began replacing traditional boiled icings in the first few decades of the 20th century.

Cake is a Viking contribution to the English language. The Oxford English Dictionary traces the English word cake back to the 13th century. It is a derivation of 'kaka', an Old Norse word which means a baked flour confection sweetened with sugar or honey, mixed with eggs and often, but not always, with milk and fat. People have consumed cakes of all kinds throughout history and at all sorts of ceremonial occasions. In today's world, people traditionally serve cakes at holidays, birthdays, weddings, funerals, and baptisms--in short, at all significant times in the cycle of life because they represent our best culinary offering honoring our most loved people. In "olden times" when refined sugar, spices, nuts, and dried fruit were expensive, it was an honor to be honored with cake. Today cake isn't extra expensive and we have many choices (store bought, box mix, scratch, bakery special order) but the message remains constant. Cake says: you're important and we love you.

The tradition of eating cake on ceremonial occasions has its basis in ancient ritual. Cakes, in the ancient world, had ties with the annual cycle, and people used them as offerings to the gods and spirits who exercised their powers at particular times of the year...The Chinese made cakes at harvest time to honor their moon goddess, Heng O. They recognized that the moon played a crucial role in the seasonal cycle, so they made round cakes shaped like the moon to reward the lunar goddess, with an image of the illustrious Heng O stamped on top... "The Russians traditionally pay their respects in spring to a deity named Maslenitsa by making blini, thin pancakes they call sun cakes...The pagan Slavs were not the only people to make round cakes to celebrate the spring sun. The ancient Celts, who celebrated Beltane on the first day of spring, baked and ate Beltane cakes as an important part of their celebration...At the Beltane festival, the ancient Celts also rolled the cakes down a hill to imitate solar movement. Rolling the cakes, they hoped, would ensure the continued motion of the sun. This activity also served as a form of divination: If the cake broke when it reached the bottom of the hill, the Celts believed that whoever rolled it would die within a year's time; but if the cake remained intact, they believed that person would reap a year's good fortune...Agricultural peoples around the globe made offerings of cakes prepared from the grains and fruits that arose from the soil. The types of ingredients used to make these cakes contributed to their symbolism...The cake's size and shape were equally symbolic of its ritual purpose...round cakes symbolized the sun or the moon...All of these cakes had definitive links to the myths the people embraced.

National Cake Day will be celebrated on Nov.26. Be sure to have a slice of cake that day, but you don’t have to wait until then! Check out all our delicious Rowena cakes.
Posted by VMP at 7:05 AM No comments: