Father's Day has been celebrated for over 100 years. The first Father's Day was celebrated on June 19, 1910 in Spokane, Washington. Sonora Smart Dodd, often referred to as the “Mother of Father’s Day,” was 16 years old when her mother died in 1898, leaving her father William Jackson Smart to raise Sonora and her five younger brothers on a remote farm in Eastern Washington. In 1909 when Sonora heard a Mother’s Day sermon at Central United Methodist Church in Spokane, she was inspired to propose that Father’s receive equal recognition. The Spokane YMCA, along with the Ministerial Alliance, endorsed Dodd’s idea and helped it spread by celebrating the first Father’s Day in 1910. In 1924 President Calvin Coolidge recognized Father’s Day and urged the states to do likewise. In 1966, President Lyndon B. Johnson signed a proclamation calling for the third Sunday in June to be recognized as Father’s Day and requested that flags to be flown that day on all government buildings. President Richard M. Nixon signed a proclamation in 1972, permanently observing Father’s Day on the third Sunday in June. 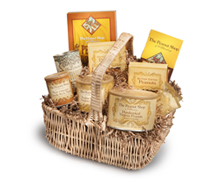 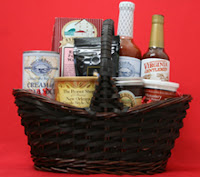 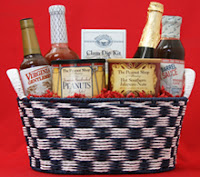 This year Father's Day is celebrated on Sunday, June 21. We know something a dad is sure to love to get for his special day......food. Dad's love Virginia Peanuts. We have peanuts for the golfing dad, the baseball loving dad or a can that says Father's Day and reminds dad to take some time off today. Dads also love tasty BBQ Sauces such as Bone Doctor’s Original Tomato Based and Vinegar based Carolina BBQ sauces, James River Barbecue Sauce. Some Dad's love soup, others have a sweet tooth for preserves and honey. Some of our gift baskets are perfect for a Dad or Granddad. Check out Southern Gourmet Treasures, Barbecue Time, Bloody Mary Brunch, or Tasty Days. How about a Smithfield Sampler that is sure to please such as the Smoked Country Sampler or a Smithfield  or Peanut Shop of Williamsburg Gift Basket such as the Virginia Country Breakfast or Classic Peanut Sampler.
Posted by VMP at 6:51 PM No comments: