The weather outside may be frightful, but cozying up with a mug of hot cocoa can make the day more delightful. December 12 is National Cocoa Day! It could hardly come at a more appropriate time. Since the 19th century, the mixture of chocolate (or cocoa powder), heated milk/water and sugar has been a fixture of the winter holidays. Prior to that, (dating back to the Mayan and Aztec civilizations), the concoction was considered to be primarily medicinal in nature, particularly for stomach problems.

Did you know that monkeys were the first creatures to discover that the cacao plant was edible and quite tasty? Over 1500 years ago, monkeys began to consume the pulp of the plant and spit out the beans. Humans soon began to follow the monkey's example and the rest is history.The Mayans are first credited with cultivating the cacao bean to brew xocoatl, an unsweetened version of modern-day hot chocolate. Much later in the 17th century, Spanish doctor Antonio Colmenero de Ledesma published the first recipe as an elixir, adding different spices to treat a number of ailments. Even President George Washington washed down his breakfast of cornmeal hoe cakes with a cup of hot chocolate. 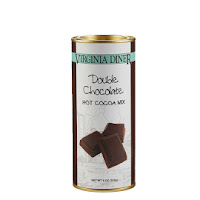 To celebrate national Cocoa Day, send a gift with our new Virginia Diner Double Chocolate Hot Cocoa Mix. a hot chocolate for the serious chocolate lover. Just mix with hot water or milk, stir and enjoy. For a holiday twist on a traditional cup of cocoa, try adding a candy cane!
Posted by VMP at 9:29 PM No comments: