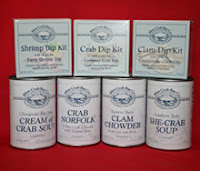 We carry many different soups, chowders and bisques from Blue Crab Bay and Chincoteague Seafood Co.
Blue Crab Bay started in 1985. Blue Crab Bay founder Pamela Barefoot had an inspired vision of what a business could be. From her seaside farmhouse kitchen she imagined a company that would put the tastes of the Chesapeake region on the map, be a protector of the environment and provide stimulating and fun employment for citizens of her rural community. Surrounding herself with foods from the Chesapeake, a functioning stove, a list of contacts and boatloads of imagination and determination, Barefoot got to work. Sales exploded, awards rained plentiful, and the number of employees mounted. Blue Crab Bay makes five delicious seafood soups and chowders.

Eastern Shore Clam Chowder is All Natural! This condensed clam chowder is a spicy and flavorful version of a traditional clear broth soup. Made without tomatoes or milk. Contains ocean clams, fresh vegetables, herbs, pepper and sea salt.

She Crab Soup - Considered one of the most elegant of all Southern soups! A creamy bisque style soup flavored with the delicate meat and roe of the Chesapeake Bay's Blue Crab.

Cream of Crab - Perhaps the ultimate comfort food of the Chesapeake Bay region! Cream of Crab soup is accented with Chesapeake Bay Style Seafood Seasoning giving it a slightly spicy flavor. Traditionally served at elegant dinners, its rich and creamy consistency is highlighted by the flavor of crabmeat. 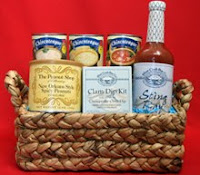 These soups and chowders are sold individually in a set of three cans and in samplers of four of the cream soups or try all five in a sampler that includes Eastern Shore Clam Chowder. She Crab Soup, Cream of Crab Soup and several samplers are available in a Blue Crab Bay award winning seafood themed gift pack. The gift pack can be gift wrapped if you like. We also sell Blue Crab Bay soups and chowders in seafood gift themed gift baskets and in other Virginia Marketplace gift baskets and in a gift box with Blue Bay dip kits.

The company was started in 1955 when Bernard Rubin, the founder and current Chairman, began selling their clam chowder to restaurants in New England under their original Cape Cod label. In 1969, as a result of a clam supply problem in the northeast, he searched for a new location and opened a processing facility in Atlantic, Virginia to take advantage of the area's abundant supply of high quality clams. In 1974, as a result of company growth, the second processing facility was opened in Chincoteague, Virginia and also became the corporate headquarters. Their newest venture, completed in May 2001, was the acquisition and move into a brand new office facility and distribution center in Parsonburg, Maryland (outside of Salisbury, Maryland). 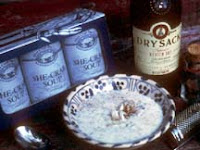 Grab a spoon! It’s National Soup Month. Every country in the world has soup recipes and family traditions from long ago. In fact it's no surprise that soup is probably the oldest form of food right up there with bread.

Approximately ten billion bowls of soup are consumed by Americans every year. Soup has been popular from its beginning in Greece in 600 B.C. when it was considered the first fast food. The Greeks sold soup as "fast food" on the street using lentils, beans and peas as the chief ingredients.

Here are some fun soup facts that history tells us:
Soup can be dated back to about 6000 B.C. and was first made of hippopotamus.

Boiling was not a common cooking technique until the invention of waterproof containers (which probably came in the form of pouches made of clay or animal skin) about 9,000 years ago)

Coming in from out of the cold to a tantalizing, hot bowl of your favorite soup is a great way to warm up. It's one of America's comfort foods through the long, cold days of winter which makes January one of the best months to be National Soup Month. But soup shouldn't just be eaten for one month; there are so many benefits for eating soup all year long.
Posted by VMP at 9:03 PM No comments: