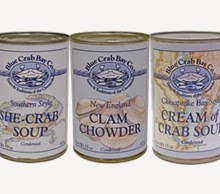 January is National Soup Month. Since it’s cold outside (in most places in the U.S.) or if you happen to be in a warm place like Florida then it’s the perfect time to have some seafood soup. We are suggesting three recipes from the Blue Crab Bay website dressing up Blue Crab Bay Soups.

The first one is Clam Chowder with Bacon Bits. Start with a can of Blue Crab Bay New England Clam Chowder. Here are the other recipe ingredients: one large white potato, one stalk celery, two strips cooked bacon, chopped, 15 oz. half-and-half, and parsley, chopped. Boil the potato until tender, then dice. Sauté finely chopped celery an
d most of the bacon, and set aside. In a stockpot, combine the New England Clam Chowder and half-and-half. Heat slowly, stirring frequently. When very hot, add the diced potato and celery, and stir until warm. Ladle into serving bowls, then garnish with crumbled bacon and parsley. Salt and pepper to taste. Serves 4.

The third recipe is “kicked up” She-Crab Soup using Blue Crab Bay She-Crab Soup. The other ingredients are: 1 can cream or half-and-half, dry sherry, whole nutmeg, fresh crabmeat, and fresh parsley for garnish. Empty contents of She-Crab Soup can into saucepan and add one can of cream or half-and-half. Heat soup slowly, stirring frequently. Do not boil. Ladle the soup into two to four bowls, depending on their size. Drizzle with sherry. Grind nutmeg atop soup and garnish with crabmeat and parsley. Serves two to four.
Posted by VMP at 6:33 PM No comments: