April 28 is James Monroe's Birthday - 5th President and a Virginian

Monroe was the third of the first five Presidents to die on the Fourth of July; John Adams and Thomas Jefferson had died on that day five years earlier. Thousands of mourners followed his hearse up Broadway in Manhattan to the Gouverneur family vault in Marble Cemetery, while church bells tolled and guns fired at Fort Columbus. Monroe's body was later moved to Hollywood Cemetery in Richmond, Virginia.

James Monroe was born on April 28, 1758, in Westmoreland County, Virginia. Monroe was the second of five children born to Spence and Elizabeth Jones Monroe, "small" planters who raised tobacco on their 600-acre farm. Initially educated at Parson Campbell's school in Westmoreland, Monroe studied at the College of William and Mary in Williamsburg, Virginia, from 1774 until he enlisted in the Third Virginia Regiment in 1776.

James Monroe came to the presidency as one of the most qualified men ever to assume the office. Monroe's fifty years of public service began with his election to the Virginia General Assembly in 1782. Subsequently, Monroe served in the Confederation Congress and in the first United States Senate; was twice Minister to France, once to Britain and to Spain; served four one-year terms as Governor of Virginia; and became President James Madison's Secretary of State and Secretary of War during the War of 1812. Monroe's greatest achievement as a diplomat was the final negotiation of the Louisiana Purchase in 1803.

In 1799, James Monroe and his family moved into their Albemarle "cabin castle," adjacent to Jefferson's Monticello. For twenty-four years the Monroe family's home was the Albemarle County plantation Highland.

In 1799, James Monroe and his family moved into their Albemarle "cabin castle," adjacent to Jefferson's Monticello. For twenty-four years the Monroe family's home was the Albemarle County plantation Highland.


Elected President of the United States in 1816 and in 1820, James Monroe resolved long-standing grievances with the British, acquired Florida from the Spanish in 1819, and proclaimed the Monroe Doctrine in 1823. Somewhat optimistically labeled the "Era of Good Feelings," Monroe's administration was hampered by the economic depression brought on by the Panic of 1819 and by the debates over the Missouri Compromise that same year. Monroe supported the American Colonization Society, which established the nation of Liberia for freed blacks. Its capital was named Monrovia in his honor. Monroe himself was tom between his belief in the "evil of slavery" and his fear of the consequences of immediate abolition.

When his presidency ended on March 4, 1825, James Monroe resided at Monroe Hill, what is now included in the grounds of the University of Virginia. He had operated the family farm from 1788 to 1817, but sold it in the first year of his presidency to the new college. He served on the college's Board of Visitors under Jefferson and under the second rector James Madison, also a former president, almost until his death.

Monroe had racked up many debts during his years of public life. He sold off his Highland Plantation (now called Ashlawn-Highland. It is now owned by his alma mater, the College of William and Mary which has opened it to the public as an historic site.

Today, visitors can tour the fifth president's home, which was recently refurbished based on new research and inventory lists. Original and period French and American furniture, boxwood gardens, and a 535-acre working farm await visitors. Reconstructed using archaeology and a 1908 photograph, the slave quarters stands alongside two original outbuildings. Children especially enjoy the resident cows, sheep, chickens, and peacocks that complete the working farm atmosphere. Throughout the year there are many special events such as the Virginia Wine Festival, Ash Lawn Opera Festival, Plantation Days, and Christmas festivities.
Posted by VMP at 10:14 AM No comments:

Why is the birthday of Thomas Jefferson, who was born  at Shadwell in Albemarle county, Virginia on April 2,  now celebrated on April 13? The letters O.S. appearing after dates on Thomas Jefferson's tombstone stand for "Old Style. The Julian or Old Style calendar was in effect in England and her colonies until 1752, when the Gregorian or New Style calendar was adopted. This added eleven days to the current date to bring the calendar year into step with the astronomical year. Thus, the birthday of Jefferson, who was born on April 2 under the Old Style calendar, is now celebrated on April 13, the New Style date. The Gregorian or New Style calendar is still in use today.

Jefferson died, perhaps appropriately, on the fiftieth anniversary of the signing of the Declaration of Independence. On June 24, 1826, Jefferson's physician was called to his bedside because of an illness, and his condition worsened until he lost consciousness on July 2. From then on, Jefferson slept fitfully, waking only to inquire whether it were yet the Fourth of July. Around noon on the fourth -- the Jubilee of Independence -- Jefferson died in bed at the age of eighty-three. Coincidentally, his friend, colleague, and co-signer of the Declaration of Independence, John Adams, died just hours later that day. Jefferson is buried in the family cemetery at Monticello.

After his death, a family member found a sketch prepared by Jefferson, containing instructions for his tombstone. Jefferson desired that his grave be marked by an obelisk inscribed with the three accomplishments for which he most wished to be remembered, "and not a word more." 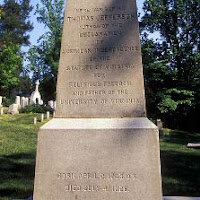 HERE WAS BURIED
THOMAS JEFFERSON
AUTHOR OF THE DECLARATION OF
AMERICAN INDEPENDENCE
OF THE
STATUTE OF VIRGINIA FOR
RELIGIOUS FREEDOM
AND FATHER OF THE  UNIVERSITY OF VIRGINIA
BORN APRIL 2, 1743 O.S.
DIED JULY 4. 1826

Conspicuously missing is the fact that Jefferson held all of the higher offices of political service, including governor of Virginia, secretary of state, vice president, and, of course, third president of the United States.

Jefferson's legacy can be found all over Virginia. No other home in the United States more accurately reflects the personality of its owner than Monticello, Thomas Jefferson's architectural masterpiece and beloved mountaintop home. In 1923 the nonprofit Thomas Jefferson Foundation was formed for the purpose of acquiring and preserving Monticello. Since then, the Foundation has owned and operated Monticello with a dual mission of preservation and education. Today, the significance of Monticello is recognized internationally -- it is the only house in America on the World Heritage List, a United Nations compilation of treasures that must be preserved at any cost.

A home and working farm for nearly 300 years, Tuckahoe Plantation is the boyhood home of Thomas Jefferson. Tuckahoe is considered by architectural historians to have one of the most complete eighteenth century plantation layouts in North America. A beautiful example of the early Georgian Period, Tuckahoe still contains the rare outbuildings which were the office and schoolhouse where Thomas Jefferson began his education. Tuckahoe is the only early Randolph home still standing on its original site and contains outstanding interior paneling and embellishments. The rambling gardens of Tuckahoe draw visitors all times of year for their show of bloom from March through October
The original Grounds of the University of Virginia, including the Rotunda and the Lawn, were designed by Jefferson to be what he called an "Academical Village." The Academical Village includes a rectangular, terraced green space known as the Lawn; two parallel rows of buildings, the Pavilions, connected by colonnaded walkways and student rooms; and the Rotunda, which closes off the north end of the Lawn. The Rotunda, a half-scale interpretation of the Pantheon in Rome, is the signature landmark of the University and its Dome Room originally housed the University library. The Pavilions are in the Federal style and no two are alike.

The Capitol was designed by Thomas Jefferson and first occupied in 1788 by Virginia's General Assembly, America's oldest English-speaking legislature. During the Civil War, the Confederate Congress also met here. The east (House) and west (Senate) wings were added between 1904-1906. The Capitol has reopened after a $104.5 million restoration and expansion project. Free one-hour guided tours are offered daily, including some holidays. Visitors also may tour on their own. Impressive interior designs and colors from 1910 have been replicated in the Rotunda, House and Senate chambers.

The Barboursville ruins was preserved as a ruin after its destruction by fire on December 25, 1884. Barboursville was one of the largest and finest residences in the region. The only building in Orange County known to have been designed by Thomas Jefferson, Barboursville was constructed between 1814-1822 for Jefferson's friend James Barbour, who served as governor of Virginia, U.S. senator and secretary of war. A brick Flemish-bond mansion with a hipped roof, Barboursville stood two stories high over an English basement. Today the estate is run as a vineyard.

Natural Bridge, in Rockbridge County, Virginia, is a geological formation in which Cedar Creek, a small tributary of the James River, carved out a gorge in the mountainous limestone terrain, forming a natural arch 215 ft  high with a span of 90 ft. It consists of horizontal limestone strata, and is the remains of the roof of a cave or tunnel through which the creek once flowed. Thomas Jefferson purchased 157 acres of land including the Natural Bridge from King George III of England for 20 shillings in 1774. He called it "the most Sublime of nature's works". Jefferson built a two-room log cabin, with one room reserved for guests, beginning its use as a retreat. While President, in 1802, he surveyed the place with his own hands. Natural Bridge was one of the wonders of the new world that Europeans visited during the 18th and 19th centuries. Natural Bridge has been designated a Virginia Historic Landmark and a National Historic Landmark and today is a major tourist attraction.


These are just some of Jefferson's legacy and accomplishments that happen to be close to our home in Charlottesville. More than a mere renaissance man, Jefferson may actually have been a new kind of man. He was fluent in five languages and able to read two others. He wrote, over the course of his life, over sixteen thousand letters. He was acquainted with nearly every influential person in America, and a great many in Europe as well. He was a lawyer, agronomist, musician, scientist, philosopher, author, architect, inventor, and statesman. Though he never set foot outside of the American continent before adulthood, he acquired an education that rivaled the finest to be attained in Europe. He was clearly the foremost American son of the Enlightenment.
Posted by VMP at 7:05 PM No comments: