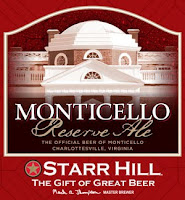 Big news in Charlottesville's world of microbrews. The Thomas Jefferson Foundation and Starr Hill, a microbrewery that started in Charlottesville and has won 14 prestigous awards for its craft beers, have teamed up and here is the Feb.01,2011 Press Release from the Starrr Hill website:

Monticello Reserve Ale will be sold in 750ml bottles at Monticello and Starr Hill's Tasting Room ONLY. It will be brewed and bottled locally at Starr Hill Brewery, in Crozet, Virginia, by Master Brewer Mark Thompson.

Monticello Reserve Ale is inspired by what was produced and consumed regularly at Monticello. It is made from a combination of wheat and corn, lightly hopped. Brewing beer was an important plantation activity at Monticello. Beer, one of the "table liquors" served with meals, was a staple of the Jefferson household. Records go back to 1772, when Jefferson's wife Martha oversaw the periodic brewing operations, producing 15 gallon casks of small beer - beer with low alcohol content - about every two weeks.

In 1815, Jefferson writes in a letter to Joseph Coppinger (himself a brewer):"I am lately become become a brewer for family use, having had the benefit of instruction to one of my people by an Englishh brewer of the first order."

Large-scale brewing began with the appearanace of a British brewer detained in Albemarle County during the War of 1812. Captain Joseph Miller improved upon the quality and quantity of Monticello beer, introducing ale, stronger beer suited to storage. While at Monticello, Joseph Miller trained the enslaved Peter Hemings in the arts of malting and brewing. Hemings - a brother of Sally - carried on the brewing operations, making 100 gallons of ale every spring and fall.

Jefferson wrote in 1821 that he had "no receipt for brewing," doubting "if the operations of malting and brewing could be successfully performed from a receipt." Using ingredients grown on the Monticello plantation, Jefferson's brews varied based on the grains that were available at any given time, including barley, and larger quantities of corn and wheat. At Monticello, about three-quarters of a pound of hops were used for every bushel of malt. 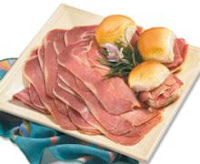